Yesterday, I was quite excited to find an e-mail in my shiny new inbox from a senior member of the security forces in our region. As it’s apparently a big security no-no to mention him by name, we’ll call him ‘Boris’ (he requested ‘the Master of Sex’, but I think we’ll stick with Boris).

The message was a call-to-arms for all pilots with the appropriate security clearance to take part in a fleet operation aiming to bring down some Pilot Owned Stations (POSs) in nearby systems. I’d not yet had the opportunity to take part in a large engagement (not counting factional warfare blobs) so I was quite keen to get involved.

The planned start time was a little behind schedule due to unforeseen server hiccups, but the arrival of key members of the security forces in the Intel channel heralded the beginning of the muster in a nearby system. The fleet was to be mostly battleships and remote repairers but, as I’d just clone-jumped from my missioning battleship, it was too far away to retrieve in time. I had a Manticore stealth bomber gathering dust in my local hangar, so that had to do.

As I rushed to the muster system, I saw in the fleet interface that we had fifty pilots involved. An impressive turnout I thought, for fifty people from various corners of the globe to be amassing online for a common purpose. But impressive just didn’t do it justice as I warped to the fleet and my screen filled with battleships. 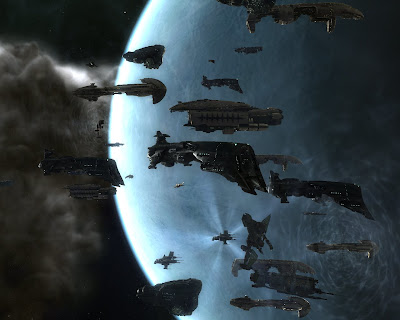 We were soon underway to our target system and the first thing that struck me was how professionally organised the whole exercise was. Despite the Ventrilo channel being full of pilots, it remained largely silent, allowing Boris to give precise and clear instructions to the fleet. All other chatter was restricted to the fleet text channel. Occasionally pilots scouting ahead would speak, relaying the status of the next system.

Fairly quickly, our fleet arrived in the target system, when Boris gave the order for a smaller vessels to remain at the gate through which we had just come, with the main body of battleships and battlecruisers warping to engage the target station. Not understanding the reasoning behind this, I was a bit miffed and cursed myself for not jumping in the Ferox battlecruiser I had also stored nearby. Then Boris told the few of us that held back to jump back through to the preceding system.

What followed was a seemingly endless period of time where I sat cloaked, watching a steady stream of battleship late-arrivals piling through the gate and into the action. I tried to make my time useful by trying to understand how the broadcast system worked. I could hear it constantly being referred to in fleet comms, but it was all a bit of a mystery to me. Finally the call came and I was allowed to re-enter the system and engage. Finally. 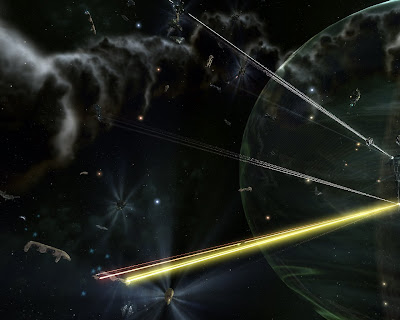 Warping in, it was breathtaking to see that number of battleships unloading a phenomenal amount of firepower into a single target. The beauty of EVEs graphics aren’t really seen at their best until you’ve witnessed something like this. The only shame is it’s really hard to get a good screenshot, because everyone rarely fires at the same moment.

I pitched in with my paltry three torpedo launchers, feeling a little humbled by the might and majesty of the battleship fleet. As per instructions from Boris, I orbited one of the remaining online sentry guns at speed in order to avoid being hit, whilst delivering my payload to the primary station target. I did so surrounded by a cloud of friendly drones who were concentrating fire on the sentry guns. The thinking was that the guns would be unable to track smaller vessels at such close range. That thinking, apparently, was wrong as one of the only other stealth bombers in the fleet was targeted and destroyed with worrying speed. 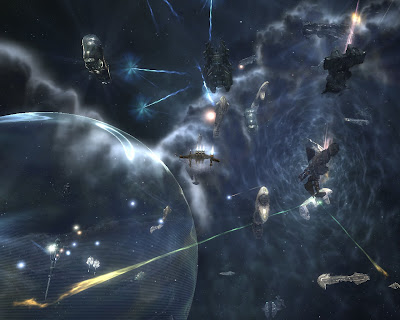 Immediately, Boris ordered all frigate and cruiser class vessels to withdraw. Which was very thoughtful of him I felt, he could’ve just decided it was our risk and we would be acceptable losses. Shortly after, it was announced that the station had been put into a ‘reinforced’ state, which I surmised was our goal.

We had two more stations to attack and I was pleased to play a significant role in one of them. I, as one of the only remaining stealth capable ships, was required to solo warp to the enemy station and take up a cloaked position within specific ranges of key structures. This allowed the main fleet to warp to me and have the right ranges without interference from the station shield bubble. Or something. I felt useful anyway. I became of further use when Knorp’s Typhoon ran out of torpedoes and I was able to resupply him.

The fleet suffered no further losses and the two remaining stations were ‘taken down’. Overall it was an interesting experience and allowed me to see some of EVEs best eye-candy, but shooting static automated objects could probably get pretty repetitive after a while. Nonetheless, respect and thanks must be given to Boris and his subordinates for co-ordinating a very slick operation. I was very grateful for the opportunity to take part and see how the pros do it. 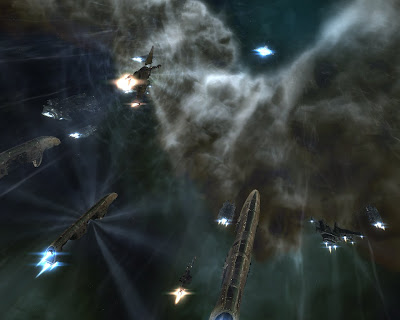 I just wish someone had warned me about the Global Criminal Countdown before I started making my way back to my home system. Then I would still have a stealth bomber.