Following Dominion’s spoofy planet graphics I, like most capsuleers, decided to become an interplanetary tourist. But after finding just about every variety of planet that I think there is (I like the plasma planets – they remind me of the entity in Fifth Element), I needed something new to do.

So I thought I’d try to land on one.

Now I know that when in warp you pass straight through celestial bodies (which although is due to engine/resource limitations can also be explained away with some theory of relativity/quantum physics/FTL technobabble), but I wasn’t sure what happens at sub-warp speeds. I began to idly wonder if CCP had snuck in a atmosphere burn-up mechanic in anticipation of further planetary interaction. Or maybe I’d just skim off the upper atmosphere with my onboard Nav computer behaving like the drunk kamikaze pilot it does whenever there are asteroids and acceleration gates around. Only one way to find out.

I happened to be in the Amarr system, so being Minmatar I thought I’d try to pay my enslaved kin a visit on Amarr Prime. Failing that I’d just pick up a few bargains at the local hypermarket. 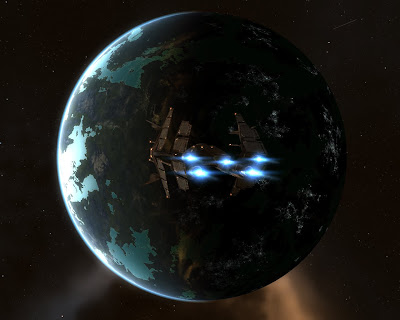 I noticed that all of the warp-in points, certainly in the Amarr system, were right on the day/night penumbra. I’d had enough of the inky blackness of space and decided to try to head for the sunny side. Maybe I could stop off at a nice equatorial island and top up my tan. Do they have grass skirts on Amarr? 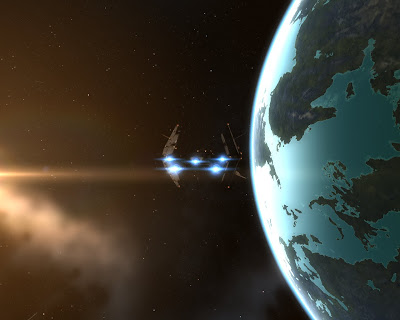 My shallow equatorial decent was slowly catching up with the day, but it was a slow and laborious process as my Minmatar shuttle chugged along. I had considered using a faster ship, but it seemed folly to charge into the atmosphere in an expensive ship, given that I couldn’t rule out this being a one-way trip. I thought I spotted a ‘Sleigh’ class sub-orbital frigate heading for the pole and turned north to intercept, but he evaded me. 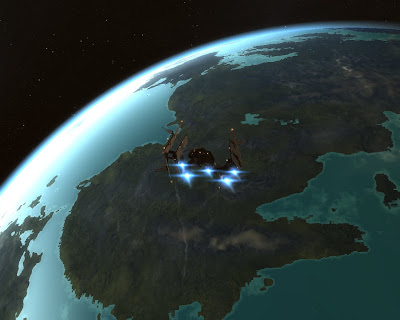 Looking down, my viewscreen was now filled with planet and the horizon was beginning to flatten out. I nervously kept checking for any shield fluctuations or warning messages, but everything appeared to be holding together. I spotted an odd rectangular anomaly on the planet surface. Some kind of planetary-scale cubist art? A shielded facility? The Royal Amarrian Pixel Museum? Whatever it was, I had the odd sensation that it was looking at me. 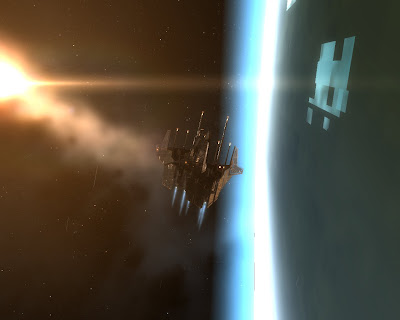 My instruments were now reading that I was a mere 29 kilometres from the surface and decending fast, I adjusted my angle and speed to slow the decent in the hope that I would have time to react if there was a nasty surprise in store… 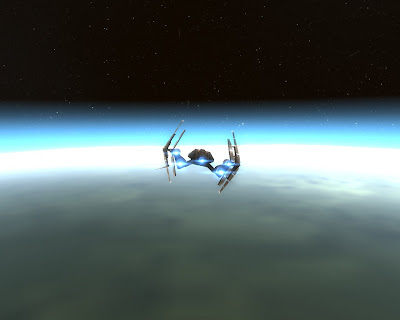 But what happened next was just bizarre. Either interference from the atmosphere was messing with the signal from my camera drones or I’d discovered some kind of fiendish Amarrian defence system. Whatever happened, my altimeter was displaying 0 kilometres, so technically, I’d landed. 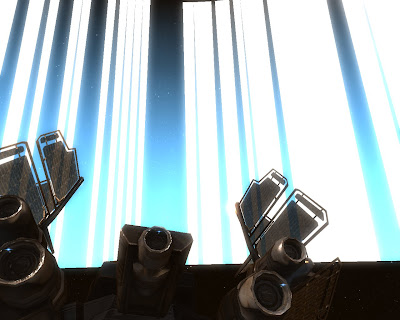 No sign of the locals, no grass skirts and no hypermarket. Amarrians are so dull. They have cornered the market on disco lights though.