How to Buy and Build POS*…

…if, like me, you’re an impatient idiot who has done very little research. I sincerely hope you haven’t stumbled across this article looking for a guide on the specifics of Starbase construction. You’ll be sorely disappointed when met with my account of poor planning and myopic foresight. Although it might still be worth a read if only as a cautionary tale.

[*note to self: find out what POS officially stands for: Player/Pilot/Puppet Owned Starbase/Station/Structure/Sex Club]

In my last post, I was considering what path to take with nearly a billion isk burning a hole in my pocket. Some very useful advice from Kirith Kodachi has seen me scouring the contracts market for a good deal on a Raven Navy Issue, although being a bit of a miser I have yet to take the plunge.

Casiella Trusa suggested I pimp myself up with some implants and get involved in some Tech I frigate PvP combat. I like that idea; potentially giving me an edge on a budget (providing I don’t get podded). And things may soon come to pass where I’ll have no choice, but more on that later.

Instead of following this sage advice offered to me by my peers, I decided to buy my own ‘space station’. This decision was based almost entirely on the fact that I was given a Hyasyoda Mobile Laboratory after completing the Caldari epic mission arc. Also, I’ve always kind of had a deal with Greenbeard (our corp founder) to get into the whole blueprint research and invention thing as he had skilled up to be our senior manufacturer. Until now I’d either been too busy blowing things up or had got frustrated by the endless queues to make use of a public laboratory. I was curious about how I could make use of my new lab.

I used EveHQ‘s POS Management tool to get a grasp of the basics. It all hinged around a control tower which, similar to a ship, provided powergrid and CPU to support other structures. The key thing to note was the fuel costs. Initial outlay aside, the more structures you have, the greater the fuel demands. The towers come in three sizes with correspondingly greater powergrid and CPU and therefore more structure capacity (and more fuel demands). I opted for the smallest tower in an attempt to reduce my running costs (it’ll still cost me in excess of 10m isk per week). I chose the Minmatar one, mainly because advice I read elsewhere suggests it is the most balanced in terms of power/CPU and it provides bonus to projectile weapon batteries which are the POS defence weapon of choice as they continue to fire even after the starbase has been put into ‘reinforced’*.

[*’reinforced’ is the state into which a besieged starbase enters once it’s shields are reduced to 25%. At this point it becomes invulnerable for as long as it’s stored supply of Strontium Clathrates lasts. This is essentially a gameplay mechanism to minimise any timezone advantage and give POS owners the opportunity to marshall a defence. All structures that require CPU cease to function at this point, rendering many defences useless.]

Initially, my plan was to set the POS up as a corp staging point on the edge of high-security space to support our operations in the vicinity of our low-sec HQ. However, a bit of research soon put paid to that. Greenbeard’s Freebooters were required to have a faction standing of at least 5.00 with Amarr and we were a long way off. So low-sec was our only option. I scouted around our system of choice to find a suitable moon without a current resident. 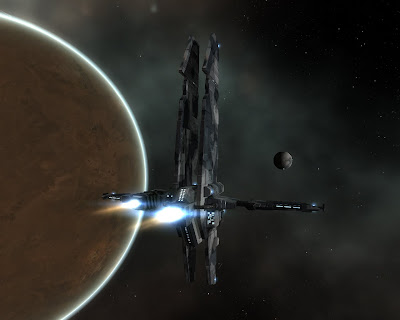 The SSS Wabbit in the search for a new home.

I even dabbled with a bit of moon probing, but it seemed most of the available moon resources were pretty worthless. 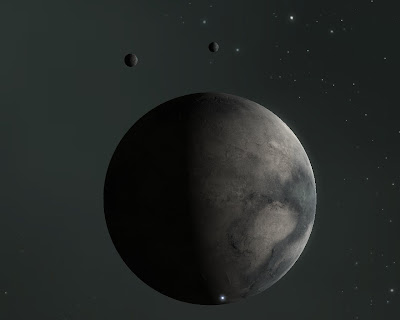 Site chosen and armed with a pimped-up hauler called the Big Empty (a Mammoth with a cargo capacity in excess of 35,000m3) and a shopping list of structures and fuel gleaned from my EveHQ research.

I purchased the following:

In addition to all this I purchased the maximum storable amount of fuel which consisted largely of crap that I’ve previously found in destroyable mission structures and never given a second thought to. Stuff like coolant, robotics, heavy water and enriched uranium (why can’t that be stored in containers?). All in all, I think I spent about 400,000isk and it took several cargo runs to move it all into a high-sec system close to the deployment site. 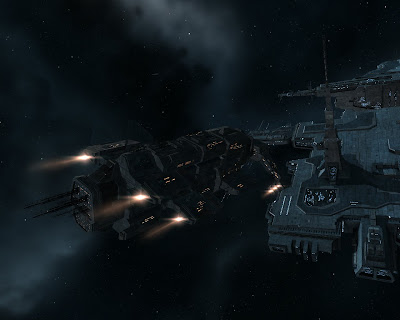 With Long Jack in a Griffin on scouting and ECM duty, we managed to move everything into position and deploy it all without event. It’s the first fifteen minutes which are the most nerve-wracking as the Control Tower anchoring and onlining countdowns ticked away slowly. Until the tower is up, there is no shielding or protection of any kind from passing opportunistic pirates, so sitting in a defenceless hauler filled with expensive cargo is not where you want to be, which is why I installed a cloak. Fortunately we were setting up in a low-sec system that has the benefit of being protected by a militia enforcing a Not Red, Don’t Shoot (NRDS) policy. Even so, it pays to be careful.

Once the shield was up, I uncloaked the Big Empty and deployed the other structures in the hold whilst Long Jack warped in and out in an expendable frigate to determine optimal placement and ranges for the defensive gun batteries. The whole operation took an hour or two, but I understand for a larger POS the time involved would be considerably more.

After everything was anchored and onlined it was time to admire our new playground. Well, I say ‘everything onlined’, but in actual fact I can’t online any of the structures within the shield when all of the defensive structures and batteries are running. This was a deliberate design decision, allowing all of the control tower resources to be used in the defence of the starbase in my absence, with concessions to the defensive capabilities made whilst someone was in residence and using the facilities. It’s pretty much like remembering to switch on the burglar alarm on your way out. 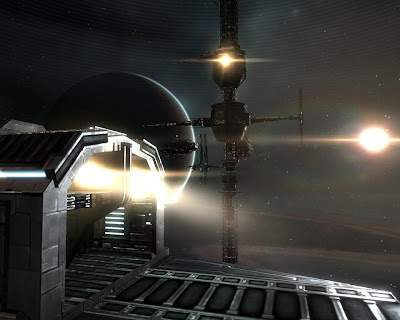 This may have all sounded very smooth, but I’m aware of a number of snags, hitches and concerns that may await us on the path ahead.

Time will tell, I’ll just have to hold onto my hat and see what happens.