Long Jack leered with satisfaction as he watched the cruiser’s ravaged skin finally succumb to the raking heat of his laser blasts. The puncture wound cut deep into the reactor housing, causing flickers of energy to spew forth and dance across the aft of the dying Minmatar hull. Catastrophic reactions within the superstructure began to buckle and tear, sending debris spinning off into the dark void. Long Jack guided his sleek Punisher frigate closer still, revelling in the tragic majesty of the larger vessel’s final moments.

A sudden shockwave rocked the crumbling Stabber, smashing open the forward decks and exploding in a brief flash of white-hot light as the fragile atmosphere within ignited. The cause was a missile strike from the distantly orbiting Kestrel frigate piloted by Long Jack’s ally, Seismic Stan. As the darkness returned, the alloy carcass drifted, ripped in twain and enshrouded in a million twinkling fragments from the now shattered solar fins.

As his victim’s tomb settled into the lazy, drifting tumble of endless death, Long Jack exhaled in triumph, allowing himself to enjoy the oily sensation of the amniotic fluid passing through his airways. He stretched out in his liquid-filled capsule, allowing the surplus adrenaline to course through his body. It was the ecstasy of the kill and the inherent natural highs that the Sebiestor lived for. Unlike his approaching wingman who had been known to introduce narcotics into his capsule life-support for his amusement.

He idly observed Seismic Stan’s Kestrel sliding into view as they both activated sensors to scan the wreckage for recoverable equipment. Not much had survived but what had was quickly loaded aboard, both pilots mindful of the possibility of more incoming hostiles. The Providence region was not known for it’s hospitality.

As the two frigates aligned to resume their cross-region journey, warp drives beginning to rumble into life, Long Jack established a connection to Galnet. He was keen to ensure that CONCORD had registered his kill. In his mind’s eye, he sifted through data, homing in on the records of the vanquished cruiser. Incredibly, the kill had been logged but not accredited to him. Long Jack’s brow furrowed with frustration as the combat log ended with the words “The final blow was laid by Seismic Stan.”

Long Jack could well imagine the smugness on the face of the hapless Freebooter’s CEO. Not content with abandoning the corporation’s agreement to participate in ongoing Amarrian conflicts and instead attempting to plunge them into an unwinnable rout in support of desperate local forces, the idiot Brutor was now resorting to kill-stealing. In an effort to quell the rising feeling of injustice, Long Jack considered locking and destroying the the frigate beside his but, before the command could be given, both ships punched into warp.

In his liquid coccoon, the Sebiestor belched a bubble of impotent fury. The next conflict would have to wait. 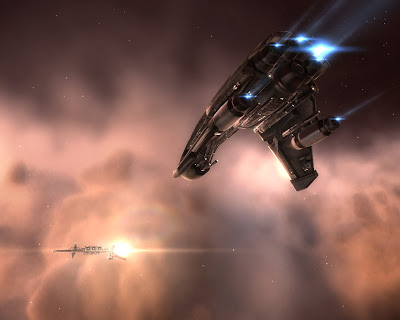