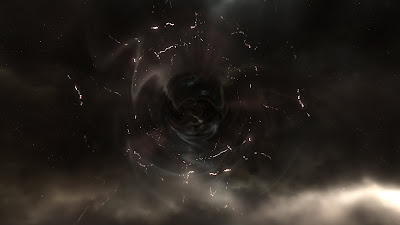 After years of our small corp of four playing in an environment full of players that were either indifferent or hostile and where the game experience was often a lonely one despite the server population, our membership of TREAD has changed all that.

I’ve had to do a LOT of reading in the last few days, just trying to get to grips with alliance organisation, figuring out who is who and understanding the wider political and astro-geographical issues affecting TREAD. All of a sudden we’ve got access to a host of knowledgeable players who can give advice on everything from a ship choice and fitting suitable for a particular fleet op to the most appropriate POS arrangement for moon mining.

Particular thanks have to be given to Ivan Zhuk, Yvella and Cladi Gerash, all of whom have taken the time in these first few days to be welcoming and to explain things that they might take for granted. I was especially impressed with Yvella’s Alt-X revelation – if you don’t know what it does, try it in space. Very useful for emergency navigation.

There is so much to blog about, but it’s a struggle to balance the doing of the thing with the blogging of the thing. Pre-alliance it was easy to manage my EVE time and I could choose my own pace, blogging at my leisure. Now the drums are banging louder and quicker and I don’t want to miss anything. I’m sure I’ll get the hang of it, I’ve just introduced another ball to juggle. I certainly don’t regret it – it’s all very exciting.

It all makes me wonder why we never joined an alliance before, but then if I think about the decisions and events that led up to this point and it makes sense. Having only really played alongside real-life friends, we at Greenbeard’s Freebooters had developed a fairly insular style of play, one that suited us but created barriers to interacting with the wider EVE community. However, always looking for new challenges, we wanted to participate in low security space. Thus a little research showed that the CVA-friendly low-sec areas around Providence operated a Not Red Don’t Shoot (NRDS) policy enforced by local militias. This seemed to be fairly unique in New Eden, where most other non-high security space is classified as the more aggressive Not Blue Shoot It (NBSI) variety. Very unwelcoming to outsiders looking to explore other aspects of the universe.

The increased danger but with a player-provided safety net that allowed us to continue to operate as a neutral corporation suited us perfectly, so we set up shop in the Derelik region. However, with my discovery of the colourful resource that is the blogging community, suddenly a more vivid picture of the 0.0 Alliance-versus-Alliance ‘endgame’ was clear. And I wanted in. Over time, our residence in the area protected by the TREAD alliance allowed us to participate in the occasional community fleet and our progression to becoming full members was a natural evolution.

However, it seems we’ve joined the TREAD alliance at a very interesting time. Everything seems to be in a state of flux with the alliance leadership standing at a crossroads overlooking the battlefields of Providence. Many of the local space-holding 0.0 alliance allies have been decimated or are licking their wounds and the political conundrum being discussed on the forums is delicious. But that is one for another post.