The tumultuous nature of all things Providence continues to entertain and surprise many who dare flirt with her fickle nature. Perhaps I was a little hasty in my previous assumption that “the enemy of my enemy is still my enemy”.

Further to the above-linked post regarding the incursions of AAA Citizens corporation The Black Aces into space frequented by my new alliance TREAD, the plot has indeed thickened. After publishing that particular post, it was pointed out to me that the article had made it onto Ga’len’s ProviWar feed and subsequently an ominous blog comment was made by Hawkcrest, the CEO of The Black Aces. I note that the message has now been removed, and not by me, but the essence of his message was “Nice story despite some inaccuracies and by the way, we will be coming back so get off our moon.” Which was rather worrying for a four-man corp, alliance members or not.

The next time I logged into EVE, I found I had received an message from Hawkcrest inviting me to contact him in-game. I was intrigued that he’d taken the time, although I suspected some kind of ultimatum delivered via gunboat diplomacy. After a few days of time-zone related misses, I finally caught up with him.

﻿Seismic Stan > Finally caught up with you.

﻿Seismic Stan > What can I do for you?

﻿Hawkcrest > I have to say I enjoyed your story.

﻿Seismic Stan > Heh, I enjoyed watching. I’ve not seen many larger scale PvP conflicts so it was fun to write about. I hope there weren’t too many inaccuracies – I meant to write about it on the night, but it took me nearly a week to get around to it.

﻿Hawkcrest > You have been in the game a long time for not seeing large scale conflict.

﻿Seismic Stan > My account wasn’t active for the entire time.

﻿Hawkcrest > Noting that your Freebooters seem to be in flux based on your writing. How open would you fellas be to joining a Larger corp with a bit more development and oportunity to fight in large scale battles on a regular basis?

﻿Seismic Stan > Well, the Freebooters are essentially me and one other at the moment. The other two members are a bit AWOL. It was in joining TREAD that we hoped to find such things.

﻿Hawkcrest > I am aware, as I said I read your blog and I’d like the chance to utilize your talents, if your open to this discussion.

﻿﻿Hawkcrest > Well tread has been in decline for many years.

Hawkcrest > IMHO tread was kept down by CVA.

﻿Seismic Stan > Well I am intrigued, and it is flattering.

﻿Hawkcrest > they were a great bunch of guys. Black Aces almost absorbed them once.

﻿﻿Seismic Stan > They still are, and I’ve joined at an interesting time where the CVA influence has been removed, so maybe the decline is over and TREAD will be able to grow.

﻿﻿Hawkcrest > the CVA influence was removed because of Black Aces, and other corps like us
﻿
Seismic Stan > I’m aware of that. Interesting times.

﻿Hawkcrest > So in a manner of speaking we have freed Tread of thier slave bonds to CVA 😉 They should be thanking us.

Seismic Stan > You could look at it like that I suppose. You said that my corp are in a state of flux. I would say that all of TREAD, Providence and the surrounding regions are also in a state of flux. I haven’t got the authority to be a diplomat and since you’re technically the enemy I’m not sure exactly what I should and shouldn’t be saying…

﻿Seismic Stan > We’ve only recently got involved in Alliance stuff and we joined TREAD as they’d been accommodating to us previously. I wouldn’t be prepared to turncoat on them. But that doesn’t necessarily rule out having some kind of meaningful relationship with you folks.

Hawkcrest > Im not asking you to turncoat on tread if you join the Aces, you should consider it seeking gainful employment. As we are all corporations in EVE and we have much to offer you that tread cannot. Black Aces has no ill will toward Tread.
I have asked their alliance diplomat to offer Tread the same thing to the entire alliance that I’m offering you….however my interest in you is that you’re a blogger and I’m interested in developing corp propaganda. You obviously would play a key role within the corporation if you were to join us as I have other projects that may work with your talents.

Seismic Stan > Us Freebooters are bit haphazard in our playstyle. I’m already feeling a little pressured by alliance life insomuch as things are expected of you. We only play casually and I wouldn’t really want “gainful employment”. Eve has a nasty tendency to become a great consumer of time if you let it.

﻿Hawkcrest > See that still works hand-in-hand with our corporation’s play style. We believe real life comes first. Where are you from Seismic?

Seismic Stan > UK. As in Britain as opposed to Ushra’Khan. 😉

Seismic Stan > I’ve been very careful to keep my blogging separate from my in-game decisions. Although I’ve discussed security with the TREAD leadership I will write as I please. Interestingly, they’ve also asked me to do some writing in an Alliance newsletter/propaganda regard. But I’m just not sure how much more time I’ll have to devote to it. I’m struggling with finding time to write for this blog.

Hawkcrest > I’d like to speak voice with you Seismic, would you be willing to dload TS3? Get on comms so I can excite you a bit, I’m fairly positive once you have had a chance to meet the guys, you will be appropriately motivated.﻿ I know what I’m trying to get across but you will need to forgive my American education.
﻿

So it turned out that The enemy of my enemy was actually decent bloke who wanted to recruit me. It was all very flattering and felt I should investigate further. Both out of genuine curiosity and some machievellian need to play both ends against the middle. I was a little wary, but I joined the Black Aces Teamspeak 3 server.

Once I’d logged in, I was moved to the ‘CEOs Office’ channel where I was privy to the closing stages of a discussion between Hawkcrest and the CEO of another AAA-Citizens Corp. I’d love to say that my journalistic instincts kicked in and I gathered lots of juicy information, but to be honest, most of what they were talking about went straight over my head. And I’m fairly sure they wouldn’t have continued to discuss anything sensitive with me in the channel.

Hawkcrest and I chatted for several minutes about the politics of CVA-ruled Providence, the subsequent unheavals and the part that he and the Black Aces had played in it all. It was interesting to note that, as he had alluded to in the earlier chatlog, Hawkcrest had previously been a Fleet Commander allied to the CVA. We then moved onto the benefits of allegiance to Against All Authorities and the truth behind the engagement I had witnessed and blogged about in the previous post. Apparently, the Black Aces fleet was simply bait, designed to provoke a CVA response which would then have been dealt with by a nearby Against All Authorities Super-capital fleet. There was no CVA response, which is a bit of a shame as I’m sure the resultant multi-fleet mash-up would have been spectacular to behold.

In an effort to further illustrate to me the benefits of The Black Aces, Hawkcrest moved us into an active channel where a myriad of colourful accents greeted me. They were predominantly English, although one confusingly claimed to be a Welsh Englishman, or an English Welshman, I can’t quite recall. It was a potentially intimidating situation for me, but they were a likeable and friendly bunch and were most welcoming, so thank you for that fellas.

Eventually, other duties brought my visit to an end but I promised I would give their offer some thought.

That was a week ago and a period of careful consideration and reflection has since ensued. Finally, I decided I was proud of my seven year unbroken membership of Greenbeard’s Freebooters. Hawkcrest wasn’t offering alliance membership, he wanted myself and whatever other Freebooters who were interested to join the admittedly much bigger and more dynamic Black Aces corporation. As a small corp made up exclusively of real-life friends of over two decades, Greenbeard’s Freebooters is pretty sacrosanct to me and whatever future adventures I have in EVE, it will always be as a Freebooter.

I also felt that I owed it to my new alliance to pitch in and help raise their profile. It didn’t sit well with me that I could simply use TREAD as a stepping stone to greater things and showing some loyalty was of more value. Hawkcrest and the Black Aces could only respect that, surely.

It is my hope that, despite my decision I will somehow be able to negotiate a way that I can continue to inhabit the area that I do without being blown to smithereens constantly. Whether that is an achievable goal remains to be seen, especially as the age of NRDS seems to be over.

In any case, if there’s another blogger out there who is looking for a new challenge or a change of pace, The Black Aces are looking for someone with a flair for writing to assist with ‘propaganda’. Could be a good gig.

However, this tale doesn’t end here. There is another twist that turns everything on it’s head. Full story coming soon… 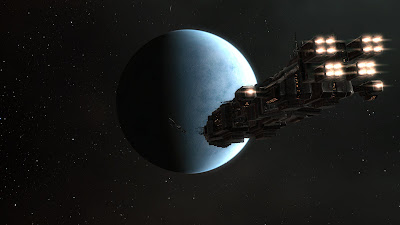