The Enemy of My Enemy is … 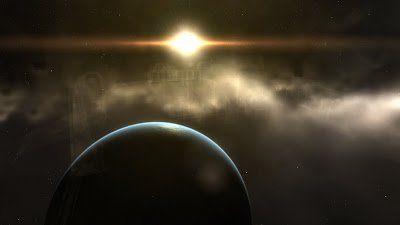 … apparently still my enemy. And probably yours too, such is the nature of EVE.

The winds of change are blowing across the null-sec sea that is Providence, causing ripples into the low-sec regions around it’s edge.

Whilst the Providence ‘Not Red Don’t Shoot’ rulebook is busy being rewritten or torn-up and pulped by Ushra’khan and allies, the influx of new organisations has resulted in some new, aggressive denizens in the adjoining region of Derelik, home to the TREAD Alliance.

Last week, a sudden spike of ‘reds’ in the local channel alerted those TREAD pilots in the area. After some investigation, it became apparent that a capital fleet was amassing at a Player Owned Starbase belonging to The Black Aces, a corporation who are members of the AAA Citizens alliance. It is my understanding that this AAA Citizens [AAA-C] is an alliance that is subservient to Against All Authorities [-A-], the mega-Alliance who was the heavyweight driving force behind the Providence Invasion. I’m guessing AAA-C’s purpose is as a proving ground for corps prior to acceptance into -A- proper. Or perhaps they are the less military, industrial backbone of -A-, I’m not sure. Whoever they are, they arrived recently, seem to have interests in Derelik and are capable of mounting a capital fleet to support those interests. Bad news for us locals.

Being curious and new to these low-sec alliance shenanigans, I felt it would be enlightening to investigate. So I jumped into a Manticore stealth bomber and warped, cloaked, to the reported POS site at 100 kilometres. Unwittingly, my arrival immediately uncloaked a fellow TREAD alliance pilot who was already observing.

Oops. So much for the the stealth. There’s a lesson to be learned there.

I made my apologies and we both recloaked, moved away from the warp-in point and continued to observe. The hostile fleet comprised at least four capitals and a host of battleships and battlecruisers. Very soon they all warped away and I docked up, but barely moments later reports came in that they were assaulting a Curatores Verititis Alliance (CVA) POS in system.

It turned out that the POS was owned by the Ammatar Free Corps (AFC), who were still licking their wounds from the loss of ownership of the station in neighbouring G-5EN2. I like the AFC, it was some of their members who encouraged myself and my fellow Freebooters to move to the area. So with an eye to sticking up for some allies, I enquired in local security channels to see if any kind of defence was being mounted. Surprisingly, it seemed as if the AFC had decided not to contest. They must have been expecting the attack, as the POS had previously been put into reinforced mode and had just come out again.

However, a TREAD pilot named Yvella informed me that he was watching the assault in a stealth bomber and wanted some more bombers in order to attempt to pick off a straggler or two when the enemy fleet departed. This sounded like fun and the only way I could give the bad guys a poke in the eye, so I fleeted up with Yvella and warped to his position. Well, 10km away – I’ve learnt my lesson.

What followed was over an hour of floating in space, cloaked and patiently watching a capital/battleship fleet pound away at an unloved POS. I joined Yvella in the Alliance Ventrilo channel where I had the opportunity to wring some knowledge from what was clearly an experienced EVE player. His observations on the behaviour of the fleet before us suggested that they were in fact an undisciplined and inexperienced fleet, which made me optimistic about future TREAD fleets.

Eventually, as the number of remaining structures dwinded, many of the ships started to warp out. They were leaving a few at a time, which was good news for us and supported Yvella’s observation of poor discipline. As we started to drift closer, still invisible, the number of reds dwindled to less than ten, then five. We knew we’d need wait until there was only one or two left. Twitching with anticipation, I waited for the order from Yvella when suddenly the number of reds started to increase. Damn.

Then it became apparent that shots were being fired. These weren’t the same reds! Someone else had been watching and had jumped onto the stragglers first. It was a corp called T-Wrecks, an apparently competent and efficient pirate corporation who had recently declared war on TREAD. Whilst Yvella and I retreated to a safe distance, T-Wrecks quickly despatched their victims and were gone. It had been a narrow escape for us.

Subsequently, a brave AAA-C Drake battlecruiser returned allowing Yvella and others to quickly descended upon the poor unfortunate. Annoyingly I was back at station about to jump into an industrial with the intention of grabbing an abandoned Moon Harvesting Array. I flew back to the POS site in my Manticore, but missed the kill. A short time later we took a Megathron into structure, but the returning AAA-C fleet forced us to withdraw.

The story should end there, but the next day in the local security channel, Corrybasler, a member of AFC, was asking if anyone wanted to set up a POS at the site where theirs had stood. He said he’d prefer to see a good moon go to allies rather than enemies. From previous conversations with the same individual in this channel, I’d always found him to be a bit difficult and critical, being intolerant of any absent or inaccurate information given. He was the kind to not suffer fools I think, so I was reluctant to open a dialogue with him.

However I did have a small POS sitting in my local hangar, having packed it up to avoid the brunt of the -A-/U’K aggressions. You might think it a foolhardy decision, but as nobody else seemed interested (probably for good reason), I volunteered. During the next couple of hours, Corrybasler couldn’t have been more helpful, giving me advice on POS setups and explaining the basics of moon harvesting. Whilst we chatted I enquired as to the reason AFC hadn’t defended their POS. It seems that a lot of their players have been so demoralised by recent events, they rarely log in. That’s a shame and I hope they bounce back.

So now I have a moon harvesting POS, albeit on a small tower in fairly hostile territory. It remains to be seen whether it’ll stay alive for long enough for me to justify upgrading it or whether TREAD can defend it if attacked by AAA-C again. After I finished setting up the POS, I noticed I had been heckled in local by AAA-C scouts.

It would’ve been unnerving had I noticed at the time, but hopefully my lack of reply was interpreted as steely stoicism and will give them pause before they come and hammer my POS. They have yet to make good on their threats, so perhaps it worked. 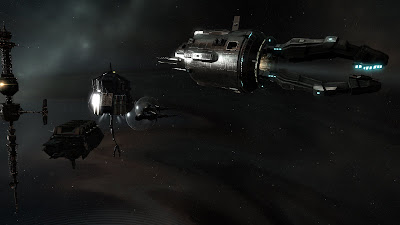 Nice to read a different perspective. Aside from the politics, what your post exhibits is how much further you will get in game if you step up and take advantage of an opportunity. Even if your POS gets killed, the experience of setting it up provided valuable learning.

Nice Read, in fact we will eventually wipe the entire system, but we were called to other CTA's The engagment that you witnessed where our capital fleets jumped out were due to a Lack of strontium for the dreadnaughts which is required to be in siege mode having destroyed 4 Pos's that evening. We jumped out our capitals leaving only the Battleships to finish off the POS. If we removed a tower and your on our spot, Id advise moving your tower in short order, because your next… Hawkcrest CEO Black Aces

^Those above remedial language skills would say "you're" but I expect nothing less from a russian pigdog pet.

@Mynxee: Heh, it looks like somebody has stepped up to teach me that lesson too. Although I think the lesson here is "be careful what you blog about".

@Hawkcrest: I appreciate the advance warning, very gentlemanly of you.

Freebooter stations are merely space bars and not real military targets. So I wouldn't worry your little selves about us Booters.

Any guns you see are purely ornamental and aren't actually functional.