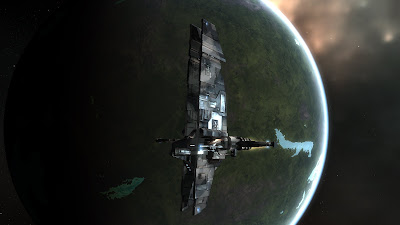 To those of us who play, it means many things. It is a platform of tools that allows us to do as we please within a wonderfully realised sci-fi setting. Within New Eden, there is a wealth of opportunity to fight, explore, build, trade and any other pursuit you can dream up. It’s also a sophisticated communications platform that allows us to network and meet with friends or spy on enemies.

In short, Its a freeform, darwinian gaming experience unlike any other – the ‘sandbox with mines in it’.

Or is it? Is this all a case of “Emperor’s New Clothes”? A recent series of blogs by Tobold, a long-time MMO player and blogger, seems to suggest that EVE is an experience only for the hardcore PvPer with every non-PvP activity being dull. His largely negative coverage understandably triggered a significant response from the typically articulate EVE player-base. However, the question remains, is there any place in New Eden for those not seeking combat?

Mark726, author of the brilliantly written EVE Travel blog, has clearly made a success of avoiding combat, enjoying the process and then writing about it. So I thought I’d ask him a few questions for the benefit of other would-be explorers.

Seismic Stan: Mark, Eve Travel is a superb concept, what led you to it?

Mark726: Well, as happens from time to time, I got bored doing the same old things in game, and decided to take a little road trip to see what was out there. To do that, I needed to figure out where I should actually visit. After a few google searches came up fairly empty, I realized that no one had actually put together a comprehensive list of landmarks in New Eden (or even tried to, as far as I can tell). People would point out sites here and there as they came across them, or mentioned some of the big ones, but there was no list of all of them. Once I realized that, the idea for EVE Travel kind of just fell into place.

S: What is involved in each expedition? How do you prepare?

M: The first step is trying to figure out where exactly to go. Google searches and searching the forums help a lot to find possible leads, as do the in-game news items. I currently have a list of about 50 possible sites sitting in a list on my notepad in game, and it just keeps growing as I hear of or find more sites. After that, I figure out what site I want to visit for the day, and check the maps to see how deep into low or null sec I’ll have to venture. From there, I take off in Professor Science. If I’m going into high sec space, obviously little prep work is needed from there. Even in low sec space, as long as I’m quick off the bat engaging the Professor’s cloak, I won’t run into any problems. It’s null sec where things really get interesting. Keeping an eye on local, and doing a two step warp (from gate to planet, then to gate) to avoid bubbles as much as possible really keeps me on my toes.

S: What resources do you use to aid your exploration? Can you recommend any useful sites or software to the uninitiated explorer?

M: Your biggest friend will be anything that gives you in depth maps of the cluster. I use EVE Strategic Maps, but Dotlan or any of the other online maps [eg. Ombeve] will serve just as well.

S: Is there anywhere that you won’t or can’t explore in New Eden?

M: I don’t feel constrained by anything, if that’s what you mean. I tend to shy away from the deep null-sec spots that I’ve come across, but that’s really only because of a lack of time than anything else. But if there’s something interesting out there that I think people should know about, I’ll head out and see it regardless of where it is.

S: What ship do you use in your travels? Have you ever used any others?

M: I principally use my Buzzard-class covops ship, Professor Science. Occasionally I’ll bring out my Drake-class ship, Legacy, if I’m going somewhere in high sec, but I tend to keep to the Professor because of its high speed, even in high sec space.

S: As I recall from your blog, Professor Science wasn’t your first Buzzard-class covops exploration frigate. What happened to it’s predecessor and how did you feel about it?

M: Heh, I’m actually onto the third iteration of the Professor, unfortunately. The first Professor was killed coming back from seeing the Steve Memorial in C9N-CC. That loss was basically my fault. The system connecting that area of null sec space was HED-GP, which is apparently a pretty heavily camped system most of the time. Strangely, when I was outbound the system was pretty empty. On my way back, seeing as how it was the last jump until entering high sec space, I let my guard down and jumped directly to the gate. I got caught up in a bubble, decloaked, and killed, all within a few moments.

The second loss was fairly similar. This time I was a little more careful, but I didn’t have anything to get me out of range in time. Drones quickly swooped down on me and decloaked me, and I was blown up shortly thereafter.

In retrospect, I really should have been more careful. I really should have realized that ESPECIALLY because HED was a direct link from null sec to high sec that it would be a heavily camped system. So while I wasn’t thrilled that I lost my ship and pod there, in retrospect it gave me a great example of what not to do while on my next journey. And the second time around helped me really tune up my fitting even more, and prompted me to put a MWD on the Professor. Since then, I’ve taken a few trips into null sec space, and haven’t been killed yet, so I guess its working.

S: Although Tobold admits to an anti-PvP bias in his MMO preferences, at least he gave it a try. What is your viewpoint of the opinion that EVE universe does not adequately cater for those who do not wish to participate in PvP?

M: It’s true that PvP isn’t entirely avoidable in EVE, but there are plenty of things to keep yourself busy and PvP risks to a minimum. Recently, there’s been a fascinating post by one of the CCP storyline writers on the mysteries behind the Sleepers, for example, and their links to the early history of New Eden. It’s stuff like there, where you have to go into those dangerous PvE areas, and work with others (instead of fighting them) to put all the pieces of this puzzle together. It’s indepth and complicated things like this, where you have to work together with others to discover something new, where EVE really shines, I think.

S: What advice would you offer to any new player that was thinking of taking up exploring?

M: If you’re serious about it, train up your skills. A covops ship and Sisters scanning probes/probe launchers will be your best friends. And be patient. Not every system will have something worth looking into, especially in high sec, but if you’re persistent and keep at it, you’ll find something (and get really great scanning practice while you’re at it).

S: Would you say that exploring in EVE has enough depth to make it an attractive primary pursuit for a player? How could it be improved?

M: Between exploration, escalations, and the like, I think there’s enough to keep you busy as a primary pursuit. I’d actually love to see escalations brought not just to anomalies/plexes, but to the other exploration sites as well. An escalation to a higher radar site, I think, would be really interesting (and hopefully valuable), as well as adding a little more dynamics to exploration. Anything that CCP can do to make the missions more immersive or tied into the storyline, I think, would be great.

S: Do you enjoy any other aspects of EVE?

M: The social aspect, by far. There’s a great community both in game and in things like the tweetfleet, and they are a major reason I’ve stayed in the game as long as I have. But in terms of gameplay, I also do some missions, but I mostly focus on exploration.

S: Are there any other important questions I have forgotten to ask or anything else you’d like to add?

M: If anyone runs into any sites that they think deserve some recognition, please let me know!