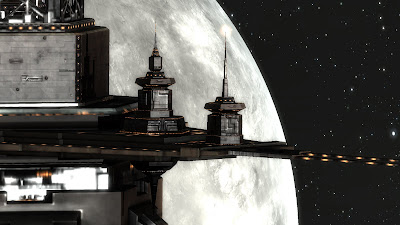 “It’s a comet or a piece of a space glacier? I don’t know, I’m a medical student not an astrogeologist.”, Ellareaux said as he watched a large, golden chunk of ice being hauled away from the docked cruiser and across the loading bay.

The thick-set greying woman beside him smiled as she guided him to fall in behind the entourage of medtechs moving the amber ice-block along with grav-clamps.

“With bits of metal and machinery fused to it? Hardly. What you are looking at is the essence of what makes our medical facilities here sustainable.”

“I’m not sure I’m with you Doctor Skeele. I thought you said this was a salvage team.” he indicated to the medtechs.

“Indeed they are, young man. However, if you are to be a medical practitioner of any ability in the future, you need to hone your investigative instincts. Look deeper.”

They followed the ice and it’s escorts through an archway and into a well-lit chamber. Ellareaux watched, still puzzled, as the medtechs began to make use of the equipment banks arrayed around the edges of the chamber. They busied themselves scanning the ice object and taking samples. One technician studied a screen for a moment then announced, “Amniotic suspension confirmed, trace neurotoxins detected.”

Ellareaux felt his skin tingle as a sterility field was engaged, compounding his growing excitement as realisation dawned on him, “It’s a capsuleer! A real-life pod-pilot!”

“But I thought they lived forever, that they couldn’t die.”

Dr. Skeele sighed, “This really is your first trip off-planet, isn’t it? Capsuleers are indeed immortals of sorts, but they are not immune to death. Far from it, in fact you could say that death is part of their lifestyle, just something of an inconvenience. Their consciousness is simply transferred to a new body.”

The technicians were now applying an assortment of heat-torches and laser-cutters as they whittled away at the frozen amniotic fluid and shattered capsule wreckage. Dr Skeele continued,

Ellareaux watched two technicians carefully remove a large buckled metal plate from the ice, and pondered the vague shadow of a body encased beneath.

“If this is an example of how they all die, I’d have to say either hypothermia or asphyxia due to exposure to space.”

“A reasonable assumption, but incorrect. As soon as the structural integrity of a pod-pilot’s capsule is compromised, a highly-toxic neurotransmitter is administered by the pod life-support systems. This serves to facilitate the consciousness transfer and shut down all synaptic activity as it does so.”

Ellareaux’s brow furrowed, “So they’re all poisoned? Effectively the cause of death is assisted suicide.”

“Exactly. Irrespective of the forces that result in a capsule’s destruction, the occupant’s cause of death is always the same. Toxin-induced neurogenic shutdown.”

The medical student considered this as the thaw continued. The ice covering the corpse had now been reduced to the thickness of no more than a few centimetres and the body was hovering, held in place by a gravity displacement field. Still locked in the semi-foetal ball caused by decerebrate flexion at the moment of death, Ellareaux could make out that the deceased was a woman, tattooed and with a reddish hue to her hair. Dr Skeele frowned at Ellareax’s apparently compassionate expression.

“Do not mourn for her.” she said in harsh tones, “This woman is no more dead than you or I. She is out there somewhere.” a dismissive skyward hand wave. ” She simply had no further use for this body and has discarded it like you might a pair of shoes.” She began to put on an apron that a medtech had just handed her.

Already fearing he knew the answer, Ellereaux inquired through gritted teeth, “So what use is the cadaver to you?”

The doctor paused for a moment and looked incredulously at the medical student, “Isn’t it obvious? We’re going to harvest her organs. In most cases, the corpse is rarely more than a few months old, and is perfectly preserved as the amniotic suspension freezes almost instantly on decompression.”

Ellereaux blanched at Dr. Skeele’s enthusiasm for the impending vivsection. She idly calibrated a neutron scalpel, then looked up at him.

“Oh don’t look like that, the resources to grow replacement organs aren’t as readily available in low-security systems as they are in the heart of the Empire. We learn to use what resources are available. Now take a breath and grab your instruments. I’ll take the pulmonary and cardio-vascular systems, you start on the hepatic and gastro-intestinal.”

And with that, the flesh harvest began.