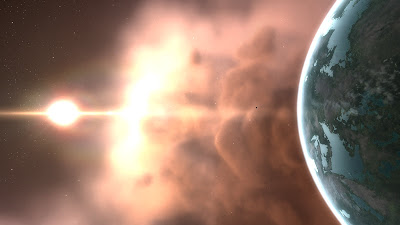 “There are three kinds of lies: lies, damned lies and statistics.” – Benjamin Disraeli

I feel a little guilty for my potentially immersion-shattering previous post. Like an immune response, the blog-reading community sprang to life to counter the possible threat to the believability and stability of EVE’s intricately woven lore. I have greatly enjoyed reading the inspired and challenging comments and it has driven me to re-visit the problem.

In short; panic over, blog-readers have saved New Eden. Fact.

The figure was just that, an average. It was based on the idea that core worlds might have a high population (perhaps as high as 100bn) and others – for example isolated worlds in null-sec – might not even be populated. However many people seemed to take exception to it, offering reasons why the average would be higher.

Some valid ideas were put forward by our intrepid commenters, the advanced technology available was the primary reason why existing optimum population values would be meaningless. This has some truth to it; the essay from which I took the 2bn optimum Earth population did cite energy consumption demands as the main reason for the optimum. Alternative fuels and off-world energy sources is certainly something that New Eden would be able to provide for the crowded worlds.

Furthermore, the acquisition of offworld resources would allow for the sustained and widespread implementation of arcology hyperstructures.

“Arcology, a portmanteau of the words “architecture” and “ecology”, is a set of architectural design principles aimed toward the design of enormous habitats (hyperstructures) of extremely high human population density. These largely hypothetical structures would contain a variety of residential, commercial, and agricultural facilities and minimize individual human environmental impact. They are often portrayed as self-contained or economically self-sufficient. The concept has been primarily popularized, and the term itself coined, by architect Paolo Soleri, and appears commonly in science fiction.” – Wikipedia

So it is perfectly plausible that a world could have a population of 500bn. Looking down from orbit, this doesn’t appear to be the case with most temperate planets I’ve seen, but then I can only view the surface. Who knows what could be underground.

Taking all this into account, I think it might be quite plausible to raise our average planetary population from 2bn to 20bn. This would change our previous total planet-bound population of New Eden from 14.4 trillion to 144 trillion. A big difference.

I may have grossly under-estimated the population of your average station. On the ships overview, some of these monstrous constructions are listed as being over 100km in size. In addition to this, they clearly have hundreds of floors, decks and levels, probably far surpassing the population of a similarly-sized city as a result.

To give a better sense of scale for a clearer comparison, the most populous city in the modern world is Tokyo, with 32.5 million inhabitants. Tokyo is 2,187.08km2, ie. 46.7km by 46.7km. So you could sit four Tokyos on the surface of some stations. A station population of 200m would be conservative, given that Tokyo has a quarter of that and it isn’t entirely composed of 500-storey buildings.

Just in case you’re interested, these are the population and size statistics for New York and London:

Taking all this into account, lets make a guestimate at the average station’s population. Shall we say 25 million? Although possibly still a little conservative, bear in mind that those stations contain huge hangar spaces for our ships. I’m not an expert on planck technology, but lets not push the theory too far, eh?

Now as before, we applied a multiplier to this to take into account all the deadspace colonies and stations that we encounter. Previously we multiplied by one-hundred. But this probably doesn’t entirely take into account every outpost, mining station, weapons platform and colony that we find in missions and complexes, not to mention the staff manning the countless stargates. Perhaps x1000 might be a little more accurate.

So our new total population for New Eden is: 266.2 trillion.

That’s a big step up from our original estimate of 14 trillion.

The other side of the statistical controversy was in the survivability of the crews. Originally we worked on the basis that every ship had an optimum crew compliment. It has since been suggested that this might not be the case, especially with NPC ships. It would certainly explain their poor performance in combat.

Some interesting ideas were offered regarding escape pod procedures. More capsule-like emergency mechanisms for command crews and more basic escape pods for rank-and-file? Or some kind of life-raft attached to wrecks with an amnesty in place for survivors? Why else would a 28-metre air-tight container emerge from salvaged wrecks? Perhaps recovered crewmen might even join the rescuing crew rather than return to the same employer. That would certainly ensure that an individual crewman might reduce the risk by sticking with the victor.

In any case, in a world where conscious thought can be instantly transmitted across light-years and human bodies can be grown for purpose, it seems likely that the technology exists to ensure that most crews survive an exploding spacecraft.

So previously we estimated that 13.5 trillion crew would be involved in scuttled ships per year. Lets reduce that by 25% to take into account understaffed ships in backwater systems and poorly supported factions, leaving us with roughly 10 trillion souls floating in space, bereft of starship.

Then, on the assumption that most of them survive, lets increase the survival rate from 50% to 95%. This means that only 500 billion crewmen die in cold space each year.

That’s 0.19% of the entire population of New Eden dying each year at the hands of capsuleers. The current natural death rate on 21st Century earth is four times higher at 0.84%. New Eden’s medical cover is probably far better than today’s, and with a birth rate augmented by cloning, maturation tanks et al, I think it’s pretty safe to say that New Eden is unlikely to face extinction at the hands of bloodthirsty starship captains.

Carry on with your murderous ways by all means, it seems New Eden is safe from annihilation after all.

With credit to the following saviours of New Eden, for all their imaginative solutions and brazen contrariness:

This is really great! Well done.

Whew!!! I shall recommence my ops. I was terrified of killing the universe and ending EvE. Then who would buy all the livestock and fertilizer being made by associates. 🙂

excellent series, have been following it with interest.

I got to admit I was psyched to see my name on there in the tiny print! Good job on hashing out all those numbers then being willing to make changes in you huge pile of numbers and reasearch.