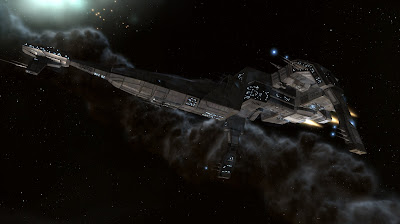 As you may or may not have figured out from the subtext of my previous post, I recently lost my missioning Raven to a random act of stupidity. Rather than replace it or upgrade to a better ship, I thought I would compound my stupidity by attempting to complete level four combat missions in increasingly inappropriate vessels.

This was largely inspired by the recent rocket improvements and the modified Hawk Assault Frigate. I had previously tried to kill NPC battleships in a Hawk but found the damage output to be inadequate to the task. I’m pleased to report that the Hawk is now quite capable of taking down battleships whilst tanking it’s way through level four combat missions, although it’s quite a slow process. One Centus Overlord in an Amarrian battleship hull was armour-repairing almost as quickly as I was damaging him with salvoes of Gremlin Rage rockets. Whether I was carrying enough ammo fast became the concern.

The eventual success of my Assault Frigate experiment made me wonder what other ships could make level four missions more challenging. I decided I needed to go balls-out and use a tech 1 ship so I opted for a Caracal cruiser. This came with interesting challenges as the Caracal is not exactly renowned for it’s tanking ability, something which is pretty key for missioning survival. I realised the key to the Caracal’s missioning was range, a bit of a problem when many missions dump you right in the middle of the action.

Sure enough, the first mission I accepted (‘Cargo Delivery’ I believe) did exactly that and worse still ‘natural phenomena’ prevented the use of a microwarp drive. With shields instantly stripped and armour evaporating, I had to bail pretty quickly for a rethink. The rate at which I was locked and fired upon by the enemy fleet led me to suspect that cruiser afterburner speeds weren’t going to be enough to get me beyond their kill-zone.

Time for some crazy.

So I strapped a battleship afterburner to the Caracal and hoped for the best. A quick speed test outside the station showed it to be just as effective as a cruiser-sized MWD, but with the added benefit of no signature bloom. The major disadvantage was the fact that the monstrous CPU and powergrid demands meant that I couldn’t run any weapons systems.

This did not deter me. I plunged back into the mission and screamed away from the beacon under a sky filled with laser fire and missiles. Initial shield impacts failed to be followed up as I sped beyond their optimal ranges and to the safety of a 100km+ orbit. Haha, now I could… well, make rude gestures at them as that was about the limit of my offensive capabilities.

In hindsight, the process of powering down the battleship afterburner and onlining the cruiser equivalent, five missile launchers and a sensor booster would have been much quicker with the installation of a capacitor booster. Oh well. After ten minutes or so I started raining hot missile destruction down on the helplessly distant fleet and the mission, and my experiment, was soon a success.

In the next installment, I’ll tell you how my attempts to use a lowly Kestrel frigate to complete a multi-roomed level four combat mission went.

Great post! Linked it from my site – I think it's cool to think about missions out of the box like that.

I mean I haven't run a mission in a long time, but I may tinker like that a bit, too.

I love you slightly whimsical optimistic tone of your posts which makes me chuckle. I wish I had your success as even when running lvl 3's I struggle a bit on occasion – I am a bit of a noob to eve though and skills may be a little or a lot below yours.

Insane. I love it!! I can hardly wait for your Kestrel o' Doom report.