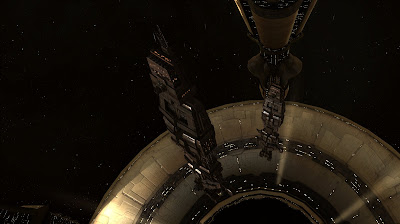 Extreme Missioning is by definition extremely stupid. Hence the title: Extreme(ly Stupid) Missioning. It’s quite a clever title I think, although it only works when you read it, not when you say it out loud. Well, not unless those gesture-tastic folk that do ‘bunny-ears’ when they’re quoting someone have also got a way to do brackets. But then they should probably keep it to themselves. Anyway, I digress.

Having previously proved that a pilot with the patience of a saint could probably complete at least some level four combat missions in a tech one frigate, it was time to take it to the next level – The Combat Industrial.

So into EFT I dived and started looking at my options. I believe the Caldari Badger saw some action in the Alliance Tournament last year, but I can barely fly those so they weren’t really an option. The Mammoth is the big boy of the Minmatar industrial fleet and is probably second only to the Gallente Iteron mk.V in terms of performance as a hauler. The Iteron V’s additional low slot (five to the Mammoth’s four) was very attractive, but again skills were my barrier so the mighty Mammoth was to be my guinea-pig of choice.

Being a Minmatar ship, I presumed that it was the done thing to armour tank it. But I soon discovered that my armour-tanking skills are somewhat below par and quickly switched to my usual shield-tanking. If there are any fitting purists I have yet to offend, that should have them baying for my blood.

After some pathetic attempts at an active-tanking fit which would have struggled in a level one mission, I consulted the great minds propping up the bar in the Old Pond Pub and between us, we came up with a capacitor stable 200dps passive omni-tanking setup with 70% average resists. Rock and roll, this thing was practically a Tengu!

With my ability to survive in the bag, it was just the damage output that needed addressing. And this was where I hit a bit of a snag – industrials only have one turret hardpoint. I tried levering a medium turret on, but the powergrid demands were so great that I would have had to strip all other modules just to make it work and even then we’d only be looking at 60dps. Being forced to compromise by using a small hybrid blaster with faction ammo took the damage-per-second down to a paltry 29. I made myself feel a little better by fitting a smartbomb, bringing DPS up to an underwhelming 35.

With my loadout effectively chosen, I sat back and gave it some thought. It was stupid. So much so that the only possible name for the vessel was the SSS Stupid. However, even with the best will in the world, there was no way the SSS Stupid was going to be able to generate enough firepower to have any impact on the larger ships in a level four mission. I was going to need help.

A quick shout out and Kasmira Dufay ‘manned-up’ and threw together the Elephant of Dewm, a gank Mammoth with an undisclosed dps, but I suspect between us we might have been able to reach 100dps. Now those NPC battleships would learn the true meaning of fear.

I requested a mission from my local agent and she offered me Pirate Invasion. This was a mission without an acceleration gate, instead we would be dropped straight into the thick of things in a hostile deadspace pocket. Oh well, here goes…

The plan was that I would warp in first in the intrepid SSS Stupid to attract the attention of the awaiting hostiles, then the more fragile Elephant of Dewm would enter the fray to deliver the pain. What could go wrong.

In I warped and my overview immediately filled with red crosses. Without provocation the spine-tingling sound of incoming locks began and the munitions started raining down on my plucky Mammoth. I watched the shield readout pensively. It was holding! Bring it on!

I had been tackled by a couple of frigates and so I began tickling them with my single blaster whilst informing Kasmira that it was her turn to warp in. The Elephant of Dewm soon appeared and began to trundle toward the nearest enemy battleship. A bold strategy, but I was sure we would need to concentrate our fire to have any chance of downing one of those beasts.

As soon as I dispatched the frigate tacklers, I set course for Kasmira’s target and became acutely aware of a major oversight on my part. My obsessive pursuit of the ultimate tank had caused me to omit the installation of any kind of propulsion. I was creeping toward the enemy battleship at a speed that would require an age for me to get close enough to register a hit, if at all.

Worse than that was the fact that my movement had now attracted the attention of the myriad of other hostiles who had, until that point, been happy to spectate. Fortunately, the newly aggressed hostiles seemed to be well beyond the effective range of their laser weapons and majority of the incoming fire was ineffective. Frustratingly, I was suffering the same problem, nothing was in range of my blaster, even when I swapped to a longer-ranged ammo.

Then, having been closed down by the enemy destroyers and cruisers, the SSS Stupid’s tank began to creak and buckle. I informed Kasmira that a tactical withdrawal may soon be in order and I aligned to our base station. With the SSS Stupid’s shield on the verge of collapse, I fleet-warped away.

I dropped out of warp alone. There was no sign of Kasmira. Erm…

It seemed I had pulled off what we Freebooters call a ‘Greenbeard Special’, which is when, at a critical moment, the squad leader warps himself away whilst claiming to have fleet-warped, leaving everyone else to die.

No matter, Kasmira would be on the ball enough to warp herself out of trouble, wouldn’t she. Kas? Kas? No response. Finally, when she did report in, it was from her pod where she was floating beside the wreckage of the Elephant of Dewm.

I passed the whole incident off as some kind of elaborate initiation ceremony and reflected on what I’d learned. In short, industrials can’t do level four combat missions. They’re too slow, they have no offensive capability to speak of and their big fat signature radii mean that no matter how well tanked they are, everything hurts.

However I have come up with a fit that might get some high-sec gate gankers CONCORDOKKENED. Or perhaps I’ll see how far into low/null-sec and can fly the SSS Stupid before getting podded. That would be a suitably stupid end to a gloriously stupid ship.

Great idea, made me laugh 🙂