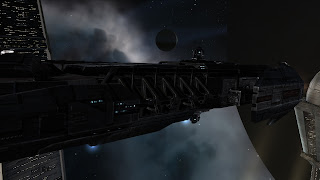 “EVE Online is renowned for its depth. Its backstory, gameplay and social aspects are all qualities that draw players in. What does immersion in EVE Online mean to you?”

I find the universe of EVE beguiling.

It is in the quiet moments whilst bereft of purpose that I catch myself contemplating the invisible details in my mind’s eye.

Only a few days ago I was absent-mindedly admiring my newly purchased Mackinaw when I noticed what could be two silhouettes at one of the portside windows on the forward section. In truth they were little more than some darker pixels, but my imagination was already considering the nature of the individuals I perceived.

One was clearly taller than the other, was one sitting? Or perhaps it was a child. Hang on! What the hell was a child doing on my industrial mining ship? In fact, what business did anyone have gazing out of the window? Shouldn’t they have duties to attend to (child labour concerns aside)? It may be a fancy Tech-II ship run instinctively by the integral commanding capsuleer, but that didn’t give crew licence to swan about stargazing and ‘roid-spotting.

Unless… maybe the figures weren’t crew. Perhaps they were paying passengers – a privately-funded science expedition conducting studies. Maybe that entire deck is dedicated to the study of astrogeology and it was full of students. There might even be a museum and a gift shop for tourists. If there were these independent enterprises taking place on board bringing in non-capsuleer cash, it would certainly explain why I never have to pay the crew with my ISK. I really must find a way to reward my enterprising command crew, I would never have thought of that.

Except I did. All because of a couple of pixels.

We don’t need every detail spoon-fed to us via the glacial development of the Incarna engine, just plant the seeds and let fertile imaginations immerse themselves. This is not to decry the concept of human avatars and walking in stations, I want the dream that Incarna represents, but not at the expense of the popularity or success of the core game.

There is more than one way to flesh out New Eden.